Competition is stressful for dogs and their human teammates. This stress adds a layer of complexity that is difficult for many teams to overcome. The good news is that we can teach our dogs to be confident and resilient. By thoughtfully and deliberately challenging them in ways they can successfully manage, we can build confidence and resilience. We can use games to teach them how to overcome pressure in the ring. We can also mindfully work on our confidence. Current research shows that human brains are malleable and that we can learn new skills regardless of our age. With practice we can replace habits that didn’t serve us with strategies that build confidence under pressure. We will explore simple techniques that you can implement immediately. Together, you and your dog can enter the ring as a confident team! 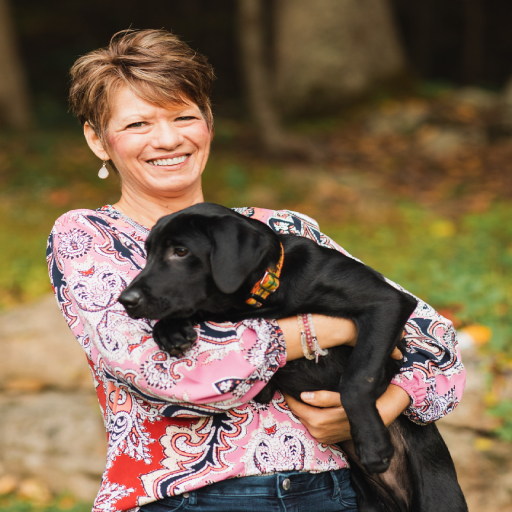 Petra (she/her) graduated from Rutgers School of Health Related Professions over 20 years ago with a degree in physical therapy. She has experience working with an extremely varied caseload including pediatric through geriatric clients with a vast range of diagnoses. Her areas of expertise include in-patient rehabilitation, orthopedics, and neurology. In 2007, Petra attended the Canine Rehabilitation Institute and became a certified canine rehabilitation therapist.

Petra trains and trials her Labrador retrievers in obedience, agility, and field. Her black Labrador retriever, Tyler, has the distinction of being the 2008 and 2009 National Obedience Champion and First Runner Up in 2010. In 2012, Petra and Tyler became the first American team to win the Obedience World Cup (they placed second in 2010). Petra’s retired agility dog, Zaidan, is still in great shape and runs with her three times a week. Petra’s dogs have also earned field titles (MH, QAA). Her dog, Zeal, has his OTCH in obedience, was second runner up at the 2018 National Obedience Championship, won the Obedience Classic in 2018, has placed first and second in a number of Regionals and earned 11 perfect scores of 200. Zayna is Petra’s first girl. She won first place in the Novice division in the prestigious Obedience Classic Tournament in 2019. In 2020 she completed her OTCH and placed second (to Zeal) in her first Regional. Zesty is the newest member of the pack. He is seven-months-old and very sweet and mischievous. He hopes to be just like his big sister and brother when he grows up!

Petra has written several articles on canine conditioning, canine injury prevention, competing with your dog, and more. She has been published in a number of magazines including Clean Run, Front and Finish, and Whole Dog Journal. Petra raced bicycles at the professional level and participated in international events. She is now an avid runner, competing in half marathons, and she practices yoga.