Don’t Get Lost in the Online Sauce: Give Your Clients More Virtual Bang for Their Buck (and Do Less Work!)

Click to Take CEU Quiz for this Presentation
This talk is eligible for CEUs from: CCPDT, IAABC, KPA

So, it’s 2021 and the strain of 2020 has gone nowhere. As we continue to tread into this era of uncertainty, you are probably also dabbling in hybrid learning or trying to balance your virtual training alongside your in person training….it can all be extremely overwhelming. You’ve worked so hard to establish your new online services, as they may have been your only source of income in the previous year, but you are running into a new found resistance as the community is OVER restrictions and would just prefer to have a trainer in person. (Although this may not be the smartest choice for either party.) Do you abandon your virtual training option? OR do you MAXIMIZE it and increase its value? How do you maximize it without taking on MORE WORK?

In this presentation, we will share a few ways you could be increasing the value of your virtual services through software, apps, and technology you may have not considered (or even heard of), while maximizing your efficiency! (Pssst…..they are all free and easy solutions!) Spend less time typing up emails and entertaining phone calls and more time actually doing what you love: training dogs and making money! 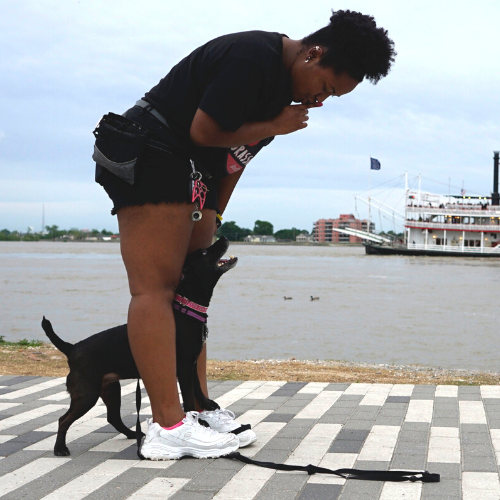 Taylor Domonique Alonda Barconey (she/her) is a native of New Orleans, Louisiana and began her journey as a trainer through the doggy day care facility, Camp Bow Wow in early 2016. Before working for Camp Bow Wow, she became interested in dog training towards the end of her college career at Xavier University of Louisiana. Taylor graduated from Xavier University of Louisiana in 2015 and received a BS in Psychology, minor in Biology. Recognizing that she had a love for dogs and Psychology, she thought to combine the two to create her future career: dog training! Fast forward to 2016 and onward, she made it a possibility.

In 2017, Taylor became an accredited dog trainer through Camp Bow Wow. She then received her CPDT-KA certification through the CCPDT in 2018. She went on to create Smart Bitch Modern Dog Training LC with Jiovany Alcaide in January 2019. She is now also a Fear Free Animal Trainer, a Supporting Member of the International Animal Association of Behavior Consultants (IAABC) and is currently working towards becoming an Accredited Dog Trainer (ADT) through the IAABC. She plans to continue to earn certifications, titles, and more as she continues to educate herself and advance along her dog training career.

Taylor considers herself a dog mom to two Patterdale Terriers named Suri and Sachi aged 9 and 7. She credits them as the reason why she became a dog trainer, as to understand her dogs’ needs and provide the most enriching lives for them. Her favorite type of training is trick training and teaching husbandry behaviors. She enjoys experimenting different tricks with her dogs. Her favorite trick is to date involved teaching her dog Sachi how to recognize certain words on paper, and offering the behavior spelled.

Taylor’s mission is to teach her community that caring for our dogs’ mental health doesn’t have to be taxing and is quite beneficial for the human and dog bond. Her mission is to also reduce dog bites in her community and beyond, all while promoting rewards-based, science-backed methods. 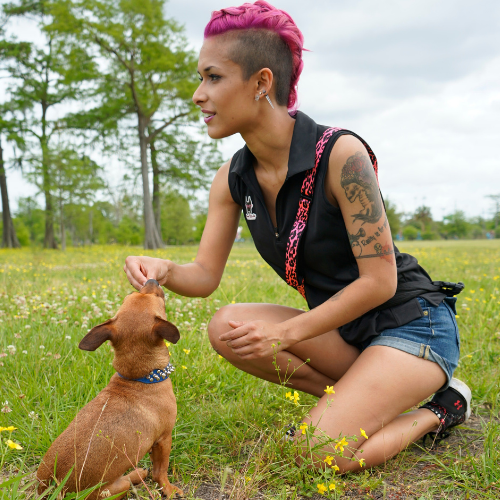 Jiovany Alcaide (she/her) is a New Orleans transplant, originally hailing from Nashville, Tennessee. Upon graduating with her BS in Theatre from Middle Tennessee State University in 2015, Jio made the big move, as it had always been a childhood aspiration of hers to leave her hometown in search of a new adventure. Also on that life checklist was to reward herself for surviving college and get the dog she would finally have time for, which would soon be known as Beetlejuice.

Jio had always known that she had a strong passion for animals, especially dogs, but the only known “successful” career path with animals was to become a veterinarian, which was not something she wanted to pursue. It wasn’t until welcoming her tiny, 1lbs, Jack Russell/Dachshund puppy into her home when she realized she had a serious passion for his training and behavior, and decided to pursue this interest. She soon bounced between jobs, attempting to find mentorship and guidance and eventually began her official training journey at a doggie daycare, where she met her soon to be business partner and “work wife,” Taylor Barconey.

With an extreme hunger for jumpstarting her new career, Jio officially became an official dog trainer with Camp Bow Wow in 2017, and quickly garnished over 300 hours of experience within her first 6 months, to then go on to earn the CPDT-KA certification title in 2018 with the Certification Council of Professional Dog Trainers (CCPDT). Given her ambition to be taken seriously as a professional trainer, Jio parted ways with Camp Bow Wow and created Smart Bitch Modern Dog Training LC with Taylor Barconey in January 2019. She would later earn her Fear Free Animal Trainer certification the following year and become a supporting member of the International Animal Association of Behavior Consultants (IAABC,) and soon to earn her Accredited Dog Trainer title later this year.

Upon all her whirlwind advances in her dog training career, she’s also proudly added her dream dog, a Doberman Pinscher named Powerline, to the family, and continues to work with her dogs (and cat) daily to improve their lives.