While a running dogwalk, or smoking fast weaves are REALLY cool to watch a dog perform in agility. The most used AND faulted obstacle on an agility course is, a jump. Jumping skills can be something that is overlooked and can come back and present performance issues later in your dogs career, or start immediately with a novice dog.

Regardless of your dogs level of competition, knocked bars can and do happen. This workshop is going to focus on how to get your dogs jumping education off to a great start.

Proper mechanics of jumping will be discussed, as well as how to tell if your dog is jumping incorrectly.

Collection exercises for teaching your dogs to turn and use their bodies safely will be shown. As well as how to tell if your dog is collecting nicely and not just “throwing themselves” over a jump.

Extension exercises are also going to be discussed, as the dogs need to be able to adjust between extension and collection on courses efficiently and safely. These exercises will be applicable even to younger dogs and they can be done with bars on the ground or using jump bumps. Minimum age needs to be 6 months.

This will be in a workshop format. The goal is to have you watch the presentation, and actually go and DO the skills talked about with your dog, and then we will have a question and answer session to help you modify or adjust to your individual dog! 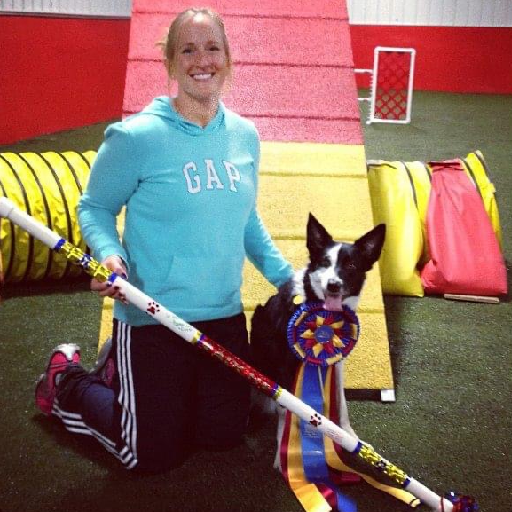 Loretta Mohler (she/her) has been involved in agility since 2003 with her first rescue dog, Ace. Since then she has earned ADCHs with 4 border collies, and multiple ADCH-Bronze, Silvers, Golds and Platinums level Championships.

In addition to working with her border collies, Loretta was the trainer for the famous little Jack Russell terrier Crackers. Crackers has been on IFCS and WAO teams since he was 2 years old. Sadly he had to be retired due to an autoimmune issue.

In 2014, Loretta was chosen to be the assistant coach for the IFCS World Team, which competed in the Netherlands. The team was very successful in this competition with many medals won.

After their success, she was asked to be Head Coach of the WAO World Team (USA). She was the head coach for 4 years. Again she has helped the team be successful, with many medals won. After coaching Team USA for 5 years she decided to focus more on individual coaching/teaching.

Outside of agility, Loretta has trained dogs for USBCHA herding, competitive obedience, rally obedience, and service dog work. Today she runs Full Tilt Dog Training in Baxter, MN, which she founded in 2007, and travels nationally and internationally giving handling seminars.