From Freaked out to Fabulous! Mental Preparation for Competitive Dog Sports

Does just the thought of competing make you nervous? Do you get sick to your stomach, sweaty, anxious and have difficulty focusing? You are not alone! Why is it that top competitors seem calm and completely in control? The difference is mental preparation. Top competitors don’t just train their dogs, they work on their mental game as well! The good news is that there are many simple techniques you can use to bring your mental game to the next level. With daily practice utilizing the skills in this webinar I not only overcame my ring nerves but now enjoy competition. We will explore a variety of techniques that you can implement immediately. With some practice, you too can conquer your ring nerves! 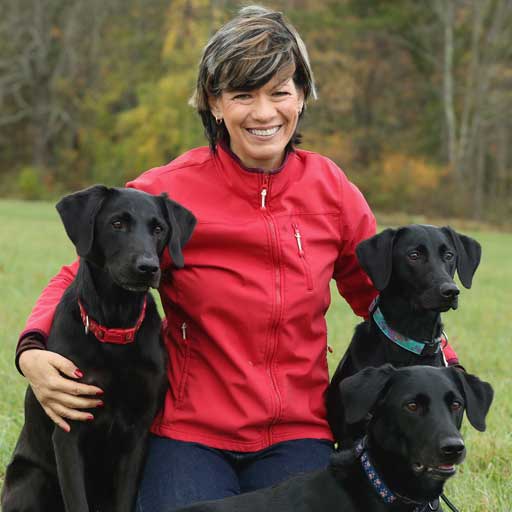 Petra graduated from UMDNJ School of Health-Related Professions with a degree in physical therapy and has experience working with an extremely varied caseload including pediatric through geriatric clients with a vast range of diagnoses. Her areas of expertise include in-patient rehabilitation, orthopedics and neurology. Petra attended the Canine Rehabilitation Institute in 2007 and graduated as a certified Canine Rehabilitation Therapist. Petra is fully certified in Canine Acupressure and is a Reiki Level 2 Practitioner. Petra’s black Labrador Retriever, Tyler, was the 2008 and 2009 National Obedience Champion and First Runner Up in 2010. In 2012, Petra and Tyler became the first and only American team to win the Obedience World Cup (they placed second in 2010). Petra’s dogs have earned titles in hunt tests, field trials, agility, and nosework. Currently she is competing at the Master Level in agility with Zaidan. Zeal has earned his OTCH in obedience, was Second Runner Up at the 2017 National Obedience Championship, has won numerous Regional events and won the prestigious Obedience Classic Tournament in 2017. Zayna, her youngest, has her Utility Dog title and is working towards her Obedience Championship. Zayna won the Novice Class competing against 72 dogs from around the country at the Eukanuba Obedience Classic this past December. Petra has written several articles on canine conditioning, canine injury prevention, competing with your dog and more. She has been published in a number of magazines including Clean Run, Front and Finish, and Whole Dog Journal. Petra currently offers webinars and online classes for canine conditioning and competition obedience training.