From start to finish – The making of a TikTok

Have you ever been amazed by a video on the internet where a dog performs a complex behaviour chain on only one cue? Did you ever wonder how they got to that? Is that just editing or are those dogs actually doing all that?

The reality is that the theory behind putting together behaviour chains is known by many but few people are successful in teaching the more complex ones to dogs, at least teaching to those levels we see performed in videos or even live in some shows with the handlers out of sight. Most of the times the difficulties come from not knowing to identify all the necessary skills to teach and then, how to actually fit them together as one big chain that is performed smoothly.

This presentation will cover the step by step process of clicker training a specific 5 behaviors chain. You will learn not only how to teach each behavior individually but when and how much to work on each one, also how to connect them, making the environment and the result from the previous behavior, the very cue for the next one. By the end we will understand how to evaluate the dogs perspective when learning and how that impacts the understanding as well as the strength of the chain.

Get you cell phone camera ready, your chain might just go viral! 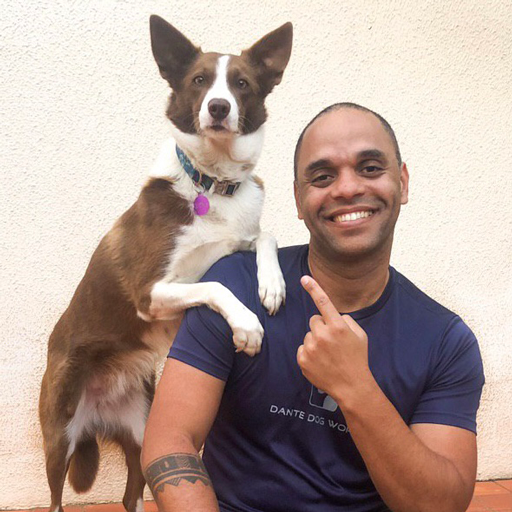 Dante Camacho (he/him) is a professional dog trainer, international presenter and has been involved in dog training since 1998. Training quickly became a passion and took him to a never-ending adventure (including leaving college to become a full time dog trainer) of constant learning. He was one of the first to introduce the use of clicker training in Brazil, “I was fascinated by the tool and all that I was able to accomplish with my dogs very early in my career.” Dante went on to work with dog owners privately for the first years of his dog training career.

In 2000, he fell in love with dog sports and started teaching his own dogs in agility and freestyle. In agility, he became a reference for positive training in Brazil, teaching seminars, being cited in magazines and websites, and making numerous TV appearances. Dante ended up representing Brazil in four FCI Agility World Championships as well as two European Open and two Americas and Caribbean. He initially performed freestyle (dog dancing) in Brazil, first in dog shows but soon on TV and at fairs, and then became a member of the Canadian Superdogs Team and performed his dancing routines in shows throughout the country and in the United States. Not only a performer, Dante eventually became a member of the production team of the shows, helping scout and train people and dogs to perform under the lights. The incredibly popular shows were seen by over one million people every year.

Dante was part of the Canadian Agility Team (European Open and Americas and Caribbean ) and also coached the Canadian Agility National Team, sharing his experience as a competitor and trainer. He has also competed and titled dogs in dock diving and rally obedience, and in recent years has been dabbling with FCI obedience and scent work. His experience teaching other species started in 2013 at a “chicken camp” with Terry Ryan and since then he’s hosted a number of camps as TA and also as an instructor. For the last year he’s worked as a volunteer at a local zoo in Brazil helping zoo administrators develop training plans to enrich and benefit the lives of species that until then had lived in precarious conditions.

Dante is an invited teacher at Rio Preto University where he teaches dog behavior and training for the post graduate degree course on Animal Behavior and Well Being. He’s an online instructor with several online courses (all in Portuguese so far, sorry….) available on his platform with over a thousand students, ranging from professional dog trainers to committed dog owners. He’s also developing his own certification course for dog trainers in his country.