Fronts and Finishes: Enthusiastic and Accurate!

Fronts and Finishes are a foundation skill for obedience and rally obedience competition. They are often the difference necessary to achieve a high-scoring round. But let’s be honest, they can also be very repetitive and boring to train for both humans and dogs! Many of us struggle to achieve quality criteria while maintaining a happy working dog.

Would you like for your dog to have both enthusiasm and accuracy in these all-important skills? Yes, it’s possible! Never taught fronts and finishes before? That’s okay! Have an already trained dog that is struggling? This is for you! Are your finishes crooked? We’ll go over that! Does your dog sit too far away? Find out ways to fix it! This presentation is for all dogs!

Not only will this presentation cover how to teach all the steps, you’ll also learn how to troubleshoot issues you might already have or run into in the future! You and your dog will learn targeting behaviors, body awareness, and how various props help communicate criteria. You’ll learn all about reward strategies and which ones work best for your dog. How do we get those in the ring environment? We’ll go over how to rotate and fade props in a way that will leave your behavior looking fabulous! Join me to find out how I use games to split down the behaviors involved in teaching fronts and finishes. The end result? A happy handler and a happy dog who thinks fronts and finishes are fun! 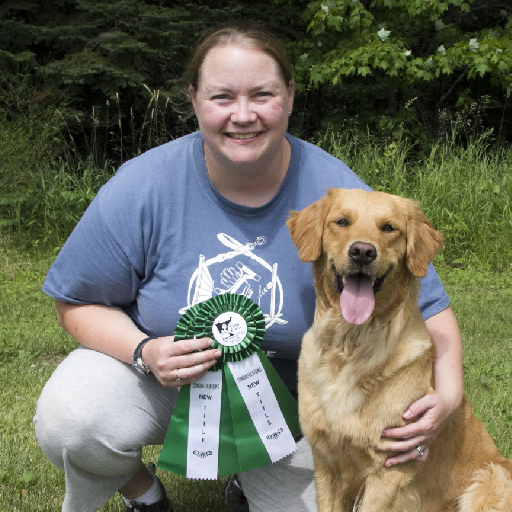 Nicole Wiebusch (she/her) started competing in dog sports as a teenager and quickly became addicted to the sport of obedience. In 2001, she acquired a golden retriever named Tucker who taught her that traditional methods weren’t the best way to a happy confident dog. This realization started her on the journey to positive reinforcement training. In 2008, Nicole started her own dog training business, Golden Paws Dog Training LLC, and teaches both pet owners and dog sports people dog-friendly training methods. She started taking classes with Fenzi Dog Sports Academy in 2013 and actively competes in a variety of performance events with her three golden retrievers.

Nicole’s golden retriever Toby UDX2 OM3 RAE was retired due to physical problems just 30 points shy of finishing his OTCH, earning multiple High in Trials and High Combineds throughout his career. Toby won the Advanced Rally class at the Golden Retriever National Specialty in both 2012 and 2015. Nicole’s current competition dog Strive has earned her UD and is working on her UDX, as well as competing in Rally and is a bit over halfway to her Rally Championship. In a limited number of trials, Strive has earned 4 High in Trials and 1 High Combined in Obedience, plus many High Combineds and High Triples in Rally. Both Toby and Strive have earned agility and dock diving titles, and Strive is titled in both hunting and TEAM. Excel is Nicole’s young dog and he is featured in many of the videos for Nicole’s classes at FDSA. Excel has dock diving titles and his TEAM1 title, and has had a very successful career so far in rally, earning his Rally Novice, Intermediate, and Advanced titles with several perfect scores.

In addition to operating Golden Paws Dog Training, Nicole is an instructor for FDSA and a TEAM judge. She has earned both the Obedience/Rally/Freestyle Trainer’s Certificate and the Sports Foundation Trainer’s Certificate from FDSA. She is also a Canine Good Citizen and Trick Dog evaluator, a Professional Member of the APDT, and is a field dog trainer for a service dog organization.