When you are dealing with many dogs in a household, you will have interactions of all kinds between the dogs. How do you know what is okay, what to watch for, or what is a big issue?

Many times, there are lots of little things that add up to big issues that can be fixed before there is a huge problem, if someone intervenes early. This session will focus specifically on those little interactions that can become big issues later. A small snark is okay? Not always! Just a little body block here and there, is that okay? Maybe, but in a certain situation, maybe not? When is it so inappropriate that full management is needed?

Guidelines will be presented to help owners decide if their dogs’ responses are appropriate and how to change those responses if they are not.

Start changing your dogs’ communication with each other from the beginning so they can learn how to coexist without the chaos. 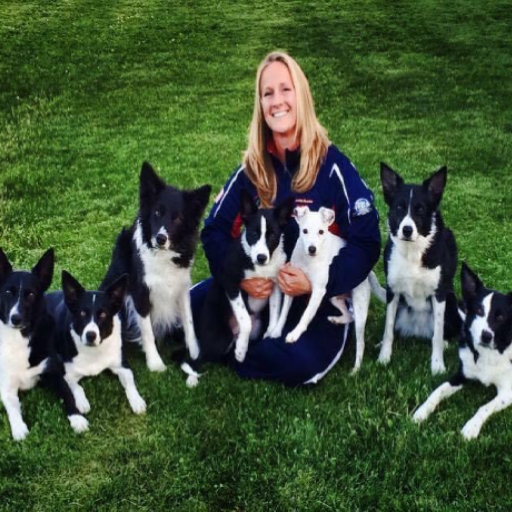 Loretta Mohler (she/her) has been involved in agility since 2003 with her first rescue dog, Ace. Since then she has earned ADCHs with four border collies: Zip (retired due to back injury), Klink, Gator (achieving his ADCH at the age of two and a half years), Lynn, and Gig. Lynn was 2013 Central Regional Grand Prix 22” champion, as well as a steeplechase and grand prix semi-finalist. Gig is her upcoming superstar!

In addition to working with her border collies, Loretta was the trainer for the famous little Jack Russell terrier, Crackers. Crackers has been on IFCS and WAO teams since he was two-years-old. Sadly, he had to be retired due to an autoimmune issue.

In 2014, Loretta was chosen to be the assistant coach for the IFCS World Team, which competed in the Netherlands. The team was very successful in this competition and won many medals.

After their success, she was asked to be head coach of the WAO World Team (USA). She has been head coach now for the last five years. Again, she has helped the team be successful, with many medals won.

Outside of agility, Loretta has trained dogs for USBCHA herding, competitive obedience, rally obedience, and service dog work. Today she runs Full Tilt Dog Training in Brainerd, Minnesota, which she founded in 2007, and travels nationally and internationally giving handling seminars.

Loretta has an ability to work with different breeds of dogs because she believes there is never a “one size fits all” training method. She is very good at working with each dog and handler as an individual team to help them succeed. One of her specialties is building drive in dogs who otherwise might be a challenge. She has also helped a number of dog-handler teams overcome unwanted stress-based behaviors. She believes it isn’t just about the handling of the courses, but the entire picture that makes a great agility team!