Live Streamed: It’s All In How They’re Raised… (Or Is It?)

This lunchtime discussion will be streamed via YouTube, free and publicly available, even to those not paying to attend the conference. Our panelists will discuss socialization and what it means to “properly” socialize a puppy or young dog.

Jessica (she/her) is a veterinary researcher who is fascinated by dog behavior. After eleven years working as a computer programmer, she decided to go back to school to research the causes of behavior problems in dogs. She received her veterinary degree in 2012 from the Tufts Cummings School of Veterinary Medicine in Massachusetts, where she also received a Master’s degree for her work on stress behaviors in hospitalized dogs. After graduation, she completed a year-long internship specializing in shelter medicine at the University of Florida Maddie’s Shelter Medicine Program. She received her PhD in genetics at the University of Illinois Urbana-Champaign, studying a group of foxes (often known as the “Siberian silver foxes”) which have been bred over many generations to be friendly to humans.

She is currently working at the Broad Institute of MIT and Harvard as a postdoctoral associate, studying the genetics of behavior in pet dogs through the Darwin’s Ark project and the Working Dogs Project, and running the Functional Dog Collaborative, a non-profit group which supports ethical breeding of healthy and behaviorally solid dogs. She also frequently teaches online classes and webinars about canine genetics and behavior. Jessica lives in Raymond, NH with her husband and three dogs. You can follow her or on Facebook at facebook.com/dogzombieblog.

Kim Brophey, CDBC, CPDT-KA, FDM, (she/her) is an applied ethologist and owner of The Dog Door Behavior Center in Asheville, NC. Kim’s commitment to Family Dog Mediation® has been recognized internationally, awarded the APDT Outstanding Trainer of the Year in 2009 and the Best Dog Trainer of WNC seven years in a row. She is a member of the International Society for Applied Ethology and the Association of Professional Dog Trainers, and a certified member and past board member of the International Association of Animal Behavior Consultants. Kim Brophey’s Dog L.E.G.S.® model of comprehensive canine science has been endorsed by prominent canine scientists such as Raymond Coppinger and embraced by reputable dog trainers worldwide. From her applied ethology content in Michael Shikashio’s Aggression in Dogs Master Course to her highly anticipated, market-disrupting Applied Ethology & Family Dog Mediation® Course, Kim’s work is a celebrated contribution to the field. Her groundbreaking book, MEET YOUR DOG, TED talk, and Beyond The Operant (BTO) collaborative have made profound waves and become favorites among both dog professionals and the public. Kim continues to build bridges and invite others to contribute to a new conversation about dogs- one that challenges us to redefine how we perceive, talk about, and treat our canine companions as a society.

Sharon (she/her) has been a professional animal trainer for over 30 years. She has been both a presenter and trainer in a range of animal shows, and currently operates a dog training and behaviour consulting business based in Newcastle, Australia. She started competing with dogs over 30 years ago, then made the change from competing with dogs to competing with horses. For the next few decades Sharon had a successful career riding, and coaching, through to the highest levels of both eventing and dressage (Grand Prix). During this time Sharon continued to train not just horses, but also dogs and a variety of other species. In 2018 she made the transition back from competing with horses to competing with dogs. She has since titled several dogs and achieved multiple wins and best in trial performances.

Intent on really understanding animals better, Sharon completed a Bachelor of Applied Science, a Graduate Diploma (Captive Vertebrate Management – wildlife and exotics) and a Master of Animal Science. Sharon is currently completing a PhD in Veterinary Pharmacology. She is a fully certified behaviour consultant with the International Association of Animal Behavior Consultants (IAABC) in both dogs (CDBC) and horses (CHBC), and is a certified professional dog trainer – CPDT-KA. Sharon guest lectures to post-graduate veterinarians and behaviourists at several universities and organisations on the topics of animal behaviour, training, species-specific cognition, welfare and psychological trauma in animals.

Nowadays Sharon’s core focus is working with dogs with behavioural issues, and helping people reach their training and competition goals with their atypical dog. In all cases, Sharon’s primary aim is to help the human/s to understand the underlying cause for their dog’s behaviour, and to use both management and behaviour-modifying training to achieve a better outcome for both the dog and their human/s. 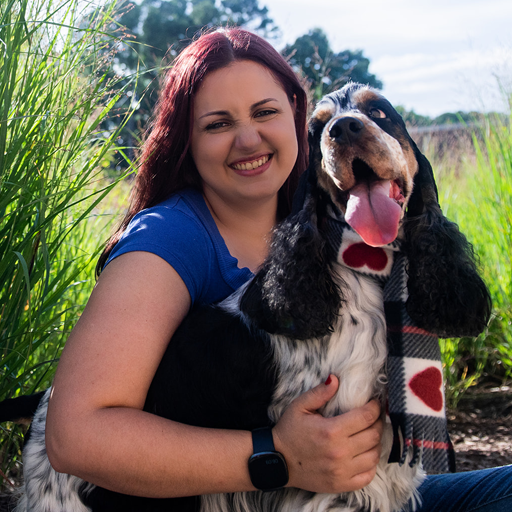 Melissa (she/her) is the host of the FDSA podcast and FDSA’s resident marketing geek. She owns and operates Click and Repeat, a small marketing agency focused on helping dog trainers build better websites and market their businesses successfully. She also co-owns Dog Trainer’s Umbrella, which offers dog trainers a community focused on helping them positively thrive — because dog trainers shouldn’t have to choose between doing what they love and making a living.

She also teaches several marketing classes at FDSA — Marketing for Pet Professionals and Building a WordPress Website — and teaches FDSA’s Treibball Classes and workshops. She is currently owned by an English cocker spaniel and a small tuxedo kitty.