One Foot in Front of the Other: Practicing Your Agility Handler Mechanics

An agility handling system is a language- a language that you and your dog use to communicate on course as you guide your dog from one obstacle to the next. Now, imagine learning a new language from someone who isn’t already fluent in that language. Sounds messy, doesn’t it?

It is commonplace to teach agility to both the handler and the dog at the same time, but what if it didn’t need to be that way? What if there were core skills that the handler could learn first, to fluency, before introducing the dog to those elements? Look no further, because those core skills will be outlined in this presentation.

Megan has broken down common handling techniques into bite sized pieces that handlers can practice without their dog until they are in automation. A handler that is fluent in their communication system can provide more clarity for their dog, which in turn boosts the confidence of the whole team.

Learn how to use your eyes, chest, feet, and arms in a consistent way through a series of exercises that are both fun and challenging for the two-legged members of the agility team.

Regardless of your experience with agility or the handling system that you choose, these core skills and exercises can be used to improve your handling mechanics. Together, we can make learning and teaching agility more enjoyable for all members of the team. 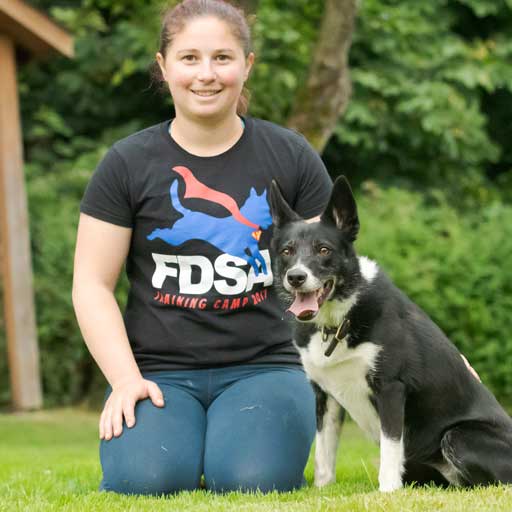 Megan (she/her) has been involved in the dog sport world nearly her entire life. While her family competed in obedience, agility was Megan’s passion right from the start. With over 20 years of experience, she has competed with a variety of dogs, including an American Eskimo, a West Highland white terrier, shelties, border collies, and Parson Russell terriers, and has worked with an even larger variety of breeds. She got her first dog, a sheltie, when she was seven-years-old and since then has competed with six of her own dogs and seven dogs belonging to others. Her accomplishments include many ADCh (USDAA Agility Dog Champion) titles, MACh (AKC Master Agility Champion) titles, regional and national championships, and representing the United States on the European Open in 2015. Megan was also a USDAA judge for over 10 years, providing valuable insight into course design, course analysis, and handling styles throughout the United States.

Megan has been teaching agility full-time, in person and online, for seven years, through her training school, Synergy Dog Sports. Her passion for sharing knowledge with her students drives her to constantly learn, grow, and evolve. Megan became a OneMind Dogs assistant coach in 2016 and she finished her coach certification in 2018. She believes in developing a system of communication based on the dog’s perspective and what dogs naturally understand, and then individualizing that system for the humans that train and run them. Synergy Dog Sports is named for the truly great things a team can accomplish together when they focus on using the strengths of both the dog’s mind and body and the handler’s mind and body, and improving on any potential weaknesses.