Structured Shaping: Best of Both Worlds

Click to Take CEU Quiz for this Presentation
This talk is eligible for CEUs from: CCPDT - Training, IAABC, KPA

Do you or your students struggle with appropriate criteria shifts while shaping? Or isolating the movement you want to mark? Does your dog become frustrated and throw behaviors or give up during a shaping session?

While shaping is considered a critical skill for dogs and handlers, it can be challenging to apply. Many trainers struggle with timing or appropriate criteria shifts, ensuring the rate of reward is high enough to prevent frustration and provide meaningful information for the dog. This can cause many to give up on shaping as a viable communication method and never improve their skill.

In this presentation you will learn different ways to apply shaping while structuring the environment with props and antecedent arrangements to provide our dogs with supplemental information. This gets us closer to errorless learning and creating a high rate of correct responses, producing greater results in less time, all while lowering frustration in both dog and handler.

This presentation is geared toward trainers looking to create more effective and efficient training sessions while maintaining a shaping paradigm and bettering their skills. Come and explore the creative use of props and “shaping the environment” to enhance your training and better your dog’s understanding for more productive training sessions. 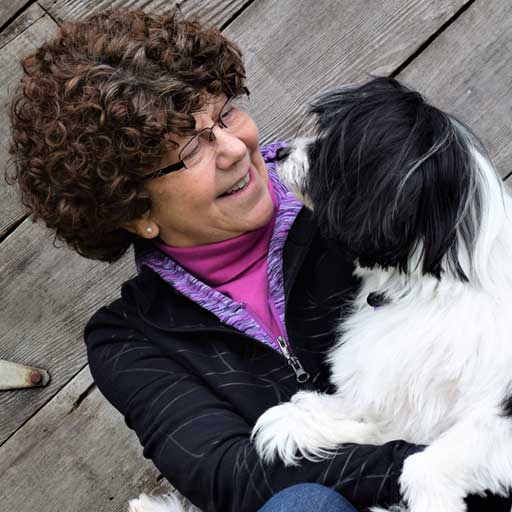 Julie Flanery B.S., CPDT-KA (she/her) has been working professionally with dogs and their owners since 1993. She focuses on the needs of the dog and helping handlers form a strong relationship, through clear communication and positive reinforcement strategies. She teaches workshops and seminars nationally and internationally on a variety of topics and is a highly sought after instructor at the Fenzi Dog Sports Academy.

Julie has placed Obedience, Freestyle, Rally, Rally-FrEe, Agility, Trick Dog and Parkour titles on her dogs and has earned a Championship in Heelwork-to-Music and a Grand Championship in Freestyle and Elite Grand Championship MCL in Rally-FrEe. She has achieved both High Technical Merit and High Artistic Merit in both Freestyle and Heelwork to Music several times over, including three prestigious Attila Challenge awards, as well as several “Top H.A.T.” awards for High Scoring Heelwork, Attention and Teamwork. In 2001 she was named “Trainer of the Year” by the World Canine Freestyle Organization and has been a competition freestyle judge since 2003.

In 2012, Julie developed the sport of Rally-FrEe to help freestyle teams increase the quality and precision of their performances. It has since become a stand-alone sport enjoyed by dog sport enthusiasts all over the world. She currently trains and competes with her Tibetan Terrier and her mixed-breed in Musical Freestyle, Heelwork-to-Music and Rally-FrEe.